On October 7, 2017, profine Group officially inaugurated its new production facility in Vadodara, India. The facility is located in the immediate vicinity of the extrusion plant of the system supplier which has existed there since 2013.

With the new plant, profine increases its capacity in India from three to five extrusion lines as well as up to 6,000 tons of uPVC profiles per year. In addition, there is a foiling line for the color-finishing of window profiles installed.

In total, the plant is designed for a capacity of 15 extrusion lines to process 15,000 tons of uPVC profiles per year. In addition to the production facilities, it includes an extensive logistics area as well as a technical training center for the partner companies. profine at the Indian production site measuring 20,000 square meters have built their new extrusion facility and invested 13 million Euros since the time they have stepped into the Indian market.

"We have been in the country for twelve years and have been writing a success story together with our Indian customers right from the start. With the new plant, we are taking another step and underline our long-term commitment to the growth market of India", explained Dr. Peter Mrosik, owner and CEO of profine Group, at the opening ceremony with around 350 guests.

profine is active in India with the KÖMMERLING brand and is regarded as one of the leading suppliers of the industry with its subsidiary in New Delhi. In the Indian production plant, country-specific systems are man-ufactured according to international quality standards, from casement and tilt & turn systems to different sliding variants.

Dr. Mrosik highlighted the performance of Farid Khan, the CEO of profine India, and his team, who launched the plant in an extraordinary short time. "In addition to state-of-the-art production technology, our new plant offers the right infrastructure to further enhance the success of our customers. Together with them we want to continue to grow in India and to proceed with our exciting and successful development." 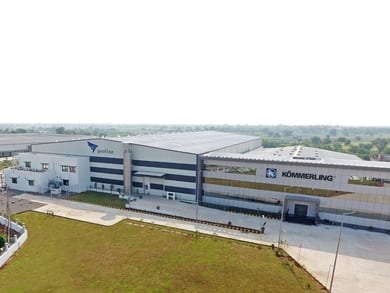